The Federal Environment Agency in Dessau (UBA) is a showcase project for the federal government due to its high quality in all aspects of sustainable construction. This estimation was also confirmed in the initial pilot phase with the 2008 Test Version, during which the Federal UBA was awarded certification with Gold. 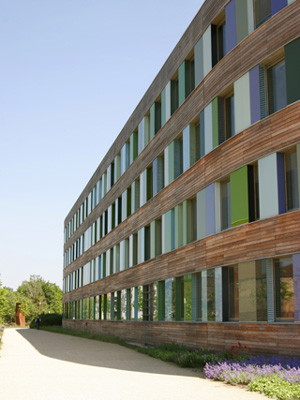 With its eye-catching architecture, the new UBA Building in Dessau sets the tone at the central site in the former industrial area. It is not only because of its shape, in the form of a colourful, rolling „ribbon“, but also and primarily because of its outstanding ecological concept that the Federal Environment Agency building is now attracting numerous interested visitors from home and abroad.

In addition to the conversion of a heavily contaminated industrial wasteland, special emphasis was also placed on energy efficiency and the utilisation of renewable energies. Thus, for example, levels at 50% of those specified by the Heat Insulation Ordinance valid at the time were achieved, the annual electricity energy demand was limited to 40 kWh/m²NGF and energy requirements were covered up to 15% by renewable sources.

Measures used for achieving these ambitious goals included the conditioning of the supply air by means of an air-driven underground heat exchanger, heat recovery, the utilisation of solar energy for generating electricity and cooling by means of solar energy-supported cold production. 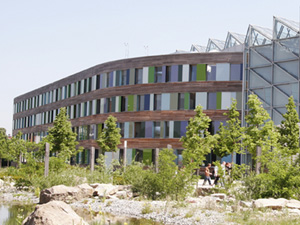